Rihanna net worth of $1.7 billion makes her the richest female musician in the world. Rihanna tops the list as the second richest musicians in the world, such success comes with hard work. She will remain at the top best and one of the best and most successful of all time.

Rihanna Net Worth And Biography

Robyn Rihanna Fenty is famously known as Rihanna. Rihanna was born on February 20, 1988, in Saint Michael, Barbados. Born to a warehouse supervisor father and an account mother who is an Afro-Guyanese and her father who is Barbadian of African, who had an Irish, English, and Scottish origin. Growing up she witnessed how her father abused her mother due his alcoholism and cocaine crack. She grew up in a three-bedroom bungalow in Bridgetown in Barbados and sold clothes with her father in a stall on the street.

Rihanna had a few CT scans for the excruciating headaches she suffered, doctors may have concluded it to be a tumor until her parents divorce when she was 14 and her health improved afterwards. Meanwhile, She had a love for reggae music which was popular at that region and that contributed to her singing strength and style. She attended Charles F. Broome Memorial Primary School and Combermere School. Although she initially wanted to graduate from high school but she chose to pursue a musical career instead. 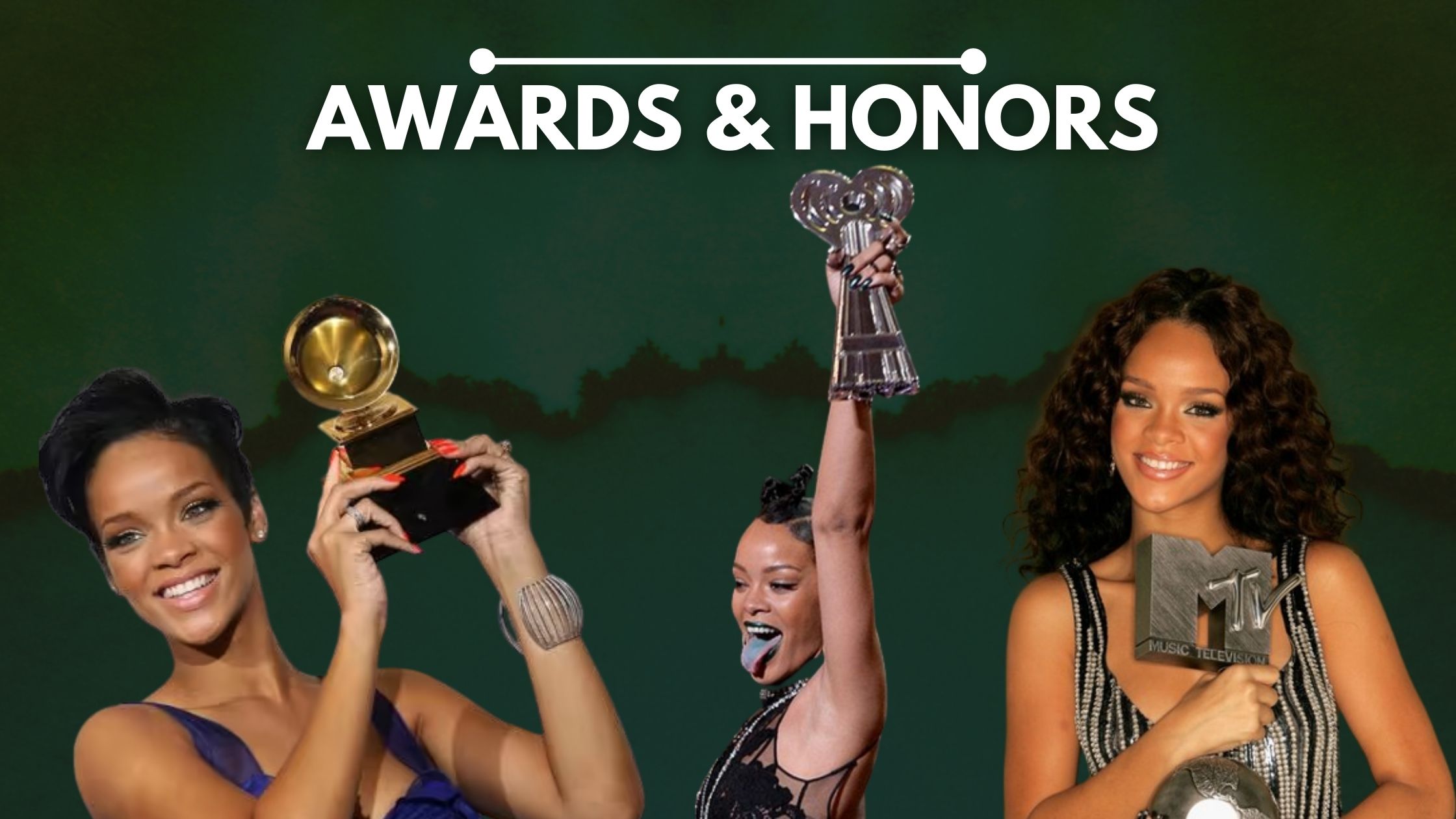 Rihanna began her career in 2003, when she formed a group with her school friends. During this time, she was discovered by Evan Rogers, an American record producer, to whom she performed renditions of Destiny’s Child’s “Emotion” and Mariah Carey’s “Hero.”

Rogers was so impressed that he organized a second meeting with Rihanna’s mother in attendance, and then asked Rihanna to his hometown in the United States to record some demo tapes that might be forwarded to record labels. She signed with Rogers and Carl Sturken’s production firm, Syndicated Rhythm Productions, the same year.

Rihanna’s demo take was sent to Def Jam Recordings, where Jay Brown, an A&R executive at the label, was among the first to hear it. Totally impressed with that he had to let Jay-Z on hearing it. Jay-Z, o the other hand had been recently appointed as the CEO of Def Jam.

He was not all convince listening to the demo but decided to give a chance. Despite being skeptical, he invited Rihanna to audition for the label. Rihanna auditioned for Def Jam in New York City in early 2005, when Jay-Z introduced her to music entrepreneur Antonio “L.A.” Reid.

She performed her future single “Pon de Replay,” Jay-Z was sold. His boss, L.A. Reid, was also impressed with her audition and told Jay-Z not to let Rihanna leave the building until the contract was signed.

Reid delegated the closing of the deal to Jay-Z and his team, which resulted in a six-album record deal with Def Jam.

She has enjoyed so much success when it comes to her musical career. In total she has 8th studio album in her career so far and the 9th underway. Aside from being a commercial success when it comes to music, the excellent singer began a Lingerie company, Savage x Fenty in May 2018, worth an estimated $270 million. The brand received so many praise due to the excellence that came with the brand and for having inclusive sizing.

Rihanna launched the fashion and beauty house in 2017 it was available online and at Sephora stores, which are also owned by LVMH the products were an instant success. By 2018, its first full calendar year, the line was bringing in more than $550 million in annual revenues, Rihanna net worth by this time has doubled, making one of the top paid musicians in the world.

Savage X Fenty is a lingerie line that Rihanna launched in 2018. Her ambition of building an inclusive brand inspired the creation of the collection. Products are available in a number of colors to complement all skin tones and sizes. In September 2018, she debuted the brand during New York Fashion Week.

Rihanna’s first major success was Fenty Beauty back in September 2017. The cosmetics brand—which launched with an impressive 40-shade foundation range—was such a hit that it made $100 million in sales within its first month and more than $550 million in annual revenue after its first year, according to Forbes’.

Despite her great success in her musical career, it is worth noting that she has also acted in a few movies, all of which were huge successes.

Rihanna has sold over 250 million records worldwide as of September 2018, making her one of the best-selling music artists of all time. Throughout her career, she has received numerous awards and honors, including 9 Grammy Awards, 12 Billboard Music Awards, 13 American Music Awards, and 8 People’s Choice Awards.

She has sold over 10 million albums in the United States, and Nielsen SoundScan named her the best-selling digital artist in the country, breaking a Guinness World Record for digital single sales of over 58 million in 2012.

Rihanna net worth keeps soaring with each success she had. She in fact has surpassed more than 100 million Gold and Platinum song certifications, Rihanna also has the most digital single awards and is the first and only artist to surpass RIAA’s 100 million cumulative singles award threshold.

According to Billboard, her total album sales stand at 54 million copies sold worldwide

Below is some of her notable works. 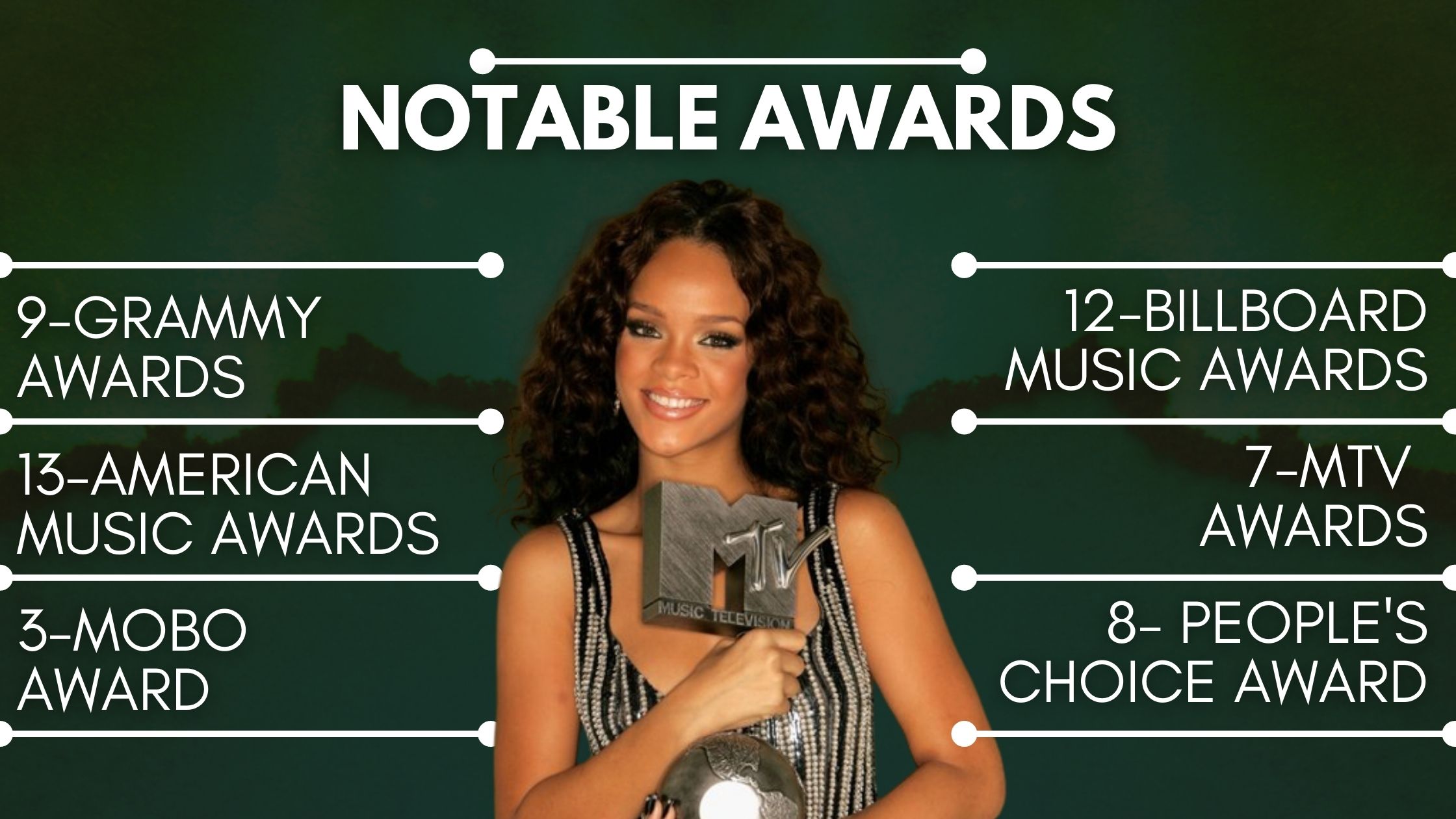 Rihanna has received multiple awards and nominations for her work in music, film, and fashion. Her awards are predominantly in pop, R&B, and hip-hop genre categories. Unlike many celebrities and musicians like, she has won a lot of nominations and awards, Rihanna have also broken world record many times.

Since her career, she has been a commercial success. Rihanna net worth keeps increasing, because of her hard work and all her album release was a hit.

Some her awards are listed below; Rihanna net worth has made her the highest earning and richest female female musician in the world. Thanks to her hard work and diversity, not only in music but also in fashion and and clothing. Rihanna net worth is estimated to be $1.7 billion. The net worth is calculated with her stakes in her companies Savage X Fenty. She stood as the third richest musicians in world.

Rihanna is an inspiration to many people, millions of people and she is a generous philanthropist. We hope she continues to inspire life.