Ricky Gervais is an English Comedian, Actor, Director, and Writer and one of the richest comedians in the world. He is best known for his comic roles and creative directing and writing which has earned him several awards. RNN details Ricky Gervais net worth, biography, career, and achievements.

Ricky Gervais was born on the 25th of June, 1961, in Reading, Berkshire London. He grew up in the Whitley suburb of Reading. Alongside a sister, Marsha, and brothers, Larry and Robert. At age 8, Ricky Gervais stopped believing in God and it was said to have been prompted by his brother, Robert. What really transpired is not known. And to date, he is still a strong atheist.

Ricky Gervais attended Whitley Park Infants and Junior Schools. After which he had his secondary education at the Ashmead Comprehensive School. Later on, he went ahead to the University College London (UCL) in 1980, after working as a gardener at the University of Reading. In 1983, he was awarded an upper second-class honors degree in Philosophy. And it was during this time he met Jane Fallon, to whom he has been engaged since 1982.

CHECK THIS  Top 10 Most Expensive Things Owned By Jeff Bezos

In 1983, during his final year at UCL, Ricky Gervais and his best friend, Bill Macrae formed the new wave pop duo Seona Dancing. Then, they were signed by the London Records, the record label released two of their singles, More to Lose, and Bitter Heart. Unfortunately, the songs didn’t make the UK Singles Chart. But, More to Lose did manage to score a hit in the Philippines.

Still hopeful he did make it, he waited for some years more in the music industry and continued to push. During this time, he also worked as a manager for Suede. 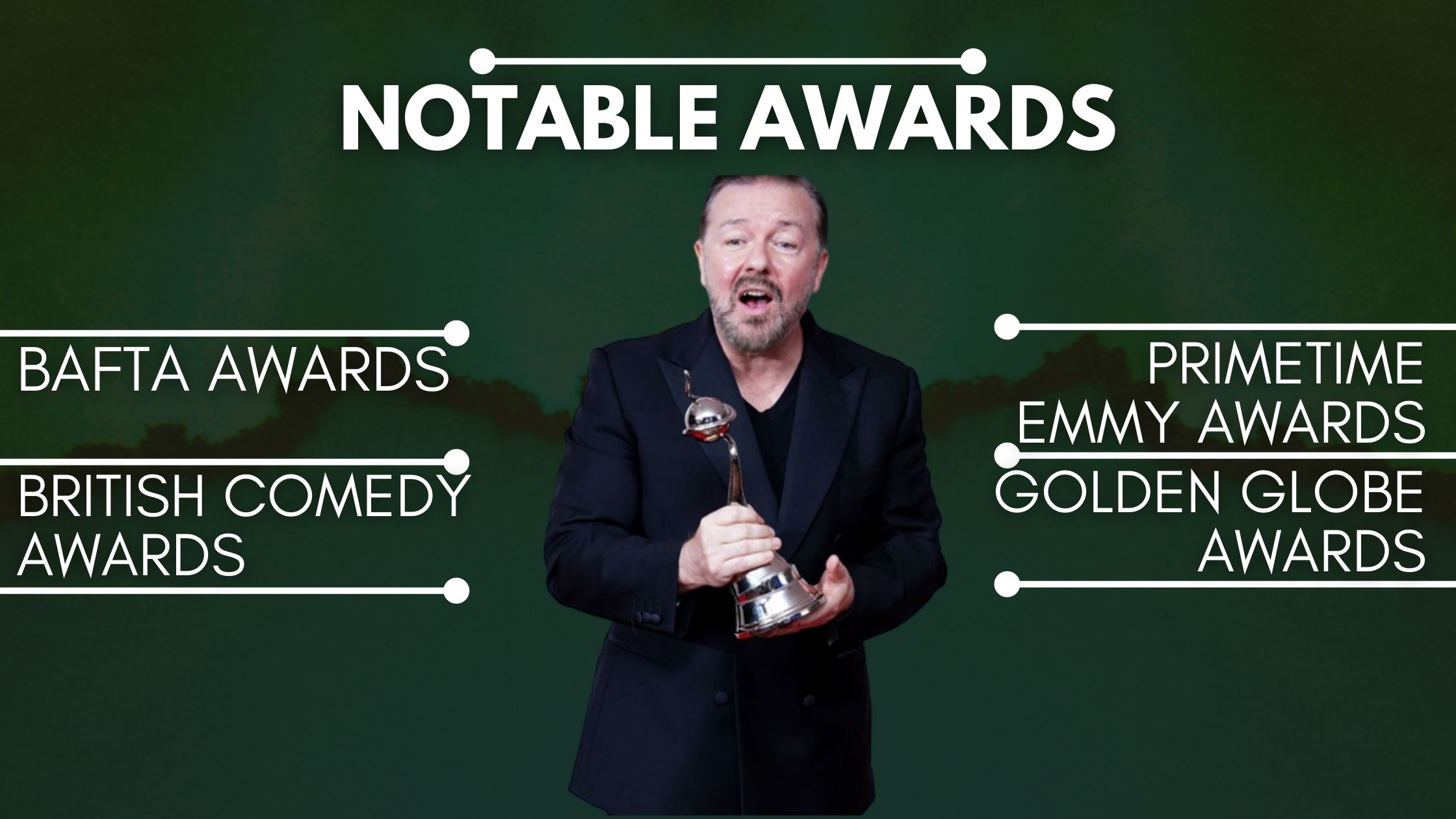 In the 1990s, he formed a writing partnership with Stephen Merchant. And in 2000, he got his own comedy chat show on Channel 4, Meet Ricky Gervais. The show at the time hosted renowned celebrities such as Micheal Winner, Jimmy Savile, Paul Daniels, Peter Purves, Jim Bowen, Stefanie Powers, and Midge Ure. Then in 2001, he became more popular with his debut in BBC comedy, The Office. And it is now known as one of the greatest comedy series of all time and receives the credit for reinventing the sitcom. This also prompted an American remake of The Office in 2005 and another sitcom, Extras in the same year. The satirical sitcom attracted celebrities such as Ben Stiller, Samuel L. Jackson, and even Ricky Gervais’ musical idol, David Bowie. Due to its satirical nature, the stars in the sitcom were excited to play along by performing exaggerated versions of themselves.

Subsequently, Ricky Gervais continnually participated in talk shows, stand-up comedies, movies, and so on. This also included appearing in the video game, Grand Theft Auto alongside Katt Williams. And, also writing books, one of which he wrote in 2004, Flanimals.

Having accumulated most of his wealth from stand-up comedy shows, sitcoms, books, appearances in video games and so on. Ricky Gervais’ estimated net worth is $140 million. Ricky Gervais is an advocate for gay rights. He believes anythinhg that promotes equality, promotes progress. And he has tagged the introduction of gay marriages in England and Wales, stating that it is a “victory for all of us.”

In 2002, Ricky Gervais decided to participate in a charity boxing match against Grant Bovey, for the UK charity telethon Comic Relief. He was trained for the three-round contest, and his fight was aired by the BBC. Eventually, Gervais came out on top position. After then, he donated his winning prize of £5,000 to the traaining of a Macmillan nurse, specialising in cancer support.

Also, Ricky Gervais is active in the prevention of illegal wilsfire trade, and is an advocate for animal rights. In 2013, he bought a $1000 cake shaped like a moonbear to raise funds for Animals Asia.

In 2015, he donated a signed acoustic guitar to help raise funds for Story Book Farm Primate Sanctuary in Ontario, Canada. Later on, the guitar was bought by Danny Young from the United Kingdom. Danny Young had the guitar signed by several other celebrities just to raise more funds for the SBFPS.

Ricky Gervais also joined in contributing to the book, Dear NHS: 100 Stories to Say Thank You. Ensuring that the proceeds went to the NHS Charities Together and, The Lullaby Trust.

Ricky Gervais is a vegetarian, an atheist, and a humanist. Gervais being a vegan was evident in his charity contributions for animal rights recorded above. Also, as earlier rec0rded, he is an atheist that stopped believing in religion since the he was 8 years old.

Over the year, he has continually engaged in programs, writings, and advocacies that backs his atheism. And, he is being praised for all of it. Dawkins referred to Ricky Gervais as a “witty hero of atheism and reason.”

Also, Ricky Gervais has been in a relationship with producer and author, Jane Fallon since 1982. However, the duo decided not to get married on the basis of not believing in God. According to Gervais, “there’s no point in us having an actual ceremony before the eyes of God, because, there is no God.” The couple also decided not have children, of which they have none to date.

Since the beginning of his career, Ricky Gervais has won several awards which includes: